Today a circus of events proved my idea that artistas guatemaltecos son dramáticas y loco.  You say, aren’t all artists dramatic? Not to this extent. However, all of the art I have seen today has been inspiring and edgy, two components of art rarely achieved.

First I will say that Mario and I stayed up until two or three working on various art projects. He is painting five giant portraits if voluptuous and strong Latin ladies with various symbolic accessories and activities. More on that later. I was designing and printing blockprinted postcards and designing flyers for my art show in antigua in May.
In the morning four artists from the antigua area and I were all supposed to drive to the city to paint murals which we had already sketched up and promised to paint as part of the festival. Mario and crystal were to busy. Juan Pablo grumpily decided to go, despite some organizational conflicts. We began to paint, with all our buckets and dirty brushes and tarps and plastic containers and rollers. 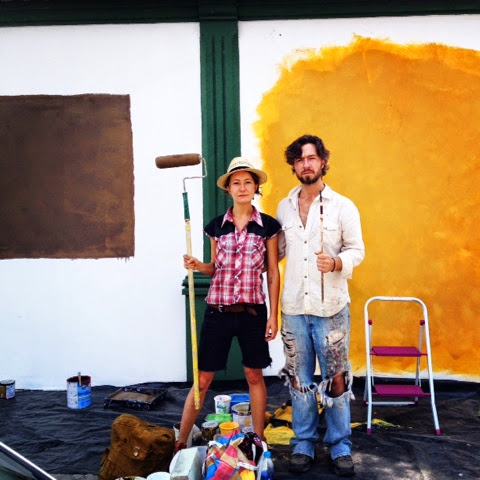 todo bien, until the owner of the wall casually mentioned to Juan Pablo that his design was not authorized. Five minutes later, having packed up all of his gear, JP was on the road back to Antigua. I practically had the whole city block to myself. Here is the work in process, just before a flash rain and thunderstorm broke loose over my buckets: Painting away, painting away.
Here is the painting in progress:

And here it is, finished!