Today I walked to the slaughterhouse down the road, “el rastro,” which I found to be guarded by more than a dozen stray dogs, all of whom rushed to my feet to shout warnings upon my arrival. I could see miles of a cement and stone labyrinth, some of the open air walls empty, some contained piles of bones, some held tranquil grey cattle, tossing their horns to deflect flies. No humans in sight, until finally, after much chaos with the dogs, a man ambled out from a dark corner, scratching his naked belly and yawning to expose his toothless jaw as if just waking up from a nap. I explained as best I could that I was looking for a cow skull for an art project, hopefully cleaned of meat. He responded, as most would, with confusion. Eventually he shouted around a little looking for his friend Fidel, who emerged from another dark corner stuffing tortillas into his maw. He responded with a little more enthusiasm, scrambling up on the roof with a stick. He lifted up a skull on the end of his stick for me to inspect. Evidentially he was pulling from a pile of skulls drying in the sun on the roof. A vulture swooped down to watch our little circus. I shook my head, that skull was too incomplete. I wanted teeth and horns. He shuffled around a but, and meanwhile I examined the three barrels of rotten offal at my feet. The next two skulls he held up looked decent, so I bought them for a dollar each and walked back with my strange prizes, incurring many querulous looks on my back home. 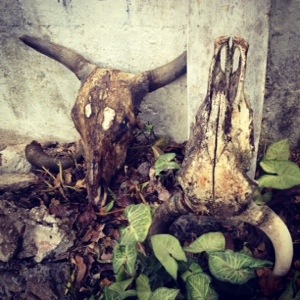