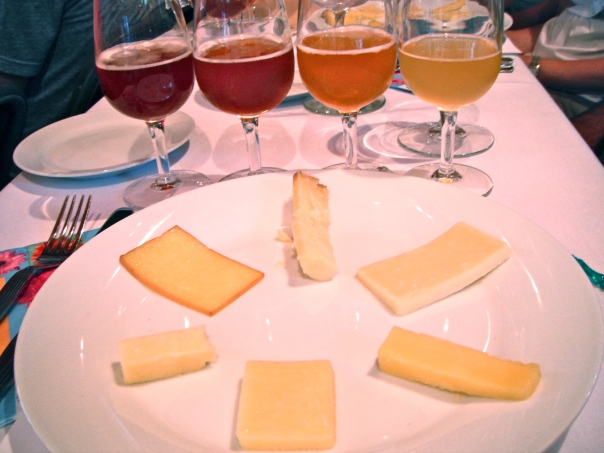 I had to pinch myself every hour this Sunday to make sure I wasn’t dreaming. The Vermont Cheesemakers festival at Shelburne Farms is my idea of heaven: a sunny barn filled with cheese, chocolate, wine, beer, strawberries, and sausage. This event was a farmer’s market on steroids, where you were encouraged to stuff your face with meal-sized samples. Along with almost 2,000 other food enthusiasts, I wandered from vendor to vendor, emitting sounds of delight over triple-cream goat cheeses and blue cheese truffles. Baby goats snoozed in the sun near the lake, and Brown Swiss cows roamed the hills surrounding the festival, moaning like prehistoric beasts.

Some vendors were more popular than others. I could hardly make my way to the table to sample goat tomme from Twig Farm. People seemed to be fighting for samples of Woodchuck hard cider. I lingered around the Fat Toad caramel, the Maplebrook burrata, Vermont Salumi, and the Laughing Moon chocolates.

I attended a seminar about beer and cheddar pairings, which offered not only four beers and 6 cheeses, but also palate cleansers such as almonds, grapes, berries, bread, salami, and more chocolate truffles. A very boisterous gastronome from Manhatten, Mike Colameco, led the tastings. Everybody seemed to agree that the best pairing was a Long Trail IPA and Grafton’s 2 year cheddar. The cheddar was potent and sharp, but it still had a full bodied creaminess that stood out from the other cheeses. The beer was mellow and malty with a tail-kick of hops.

A cooking demonstration led by Tony Campos, a television host for New England Cooks, and Chef Steve Atkins from The Kitchen Table Bistro, turned out to be a disastrous comedy. The mic system malfunctioned, making it so that Steve couldn’t budge from his station even to flip a steak without the speakers screeching. Tony had to act as Steve’s puppet, grabbing arugula out of the cooler and agitating endives on the grill. Luckily, he made light of his culinary incompetence by turning his mistakes into a comedy routine. Despite this annoying drama, Steve managed to make a few delicious dishes, such as his open-faced ribeye grilled cheese with grilled yellow squash and a buttered corn polenta.

Despite my already bursting belly, the demonstration made me hungry for more samples. There were dishes of ice cream, maple cheesecake, and even roasted gourmet s’mores with maple crackers. After all of this sugar and cream, I finished with pickles. I was relieved to find pickled garlic, beets, and cucumbers– the only green in a sea of oozing, crumbling wheels of white.

1 thought on “Pigging at the Cheesemakers Festival”